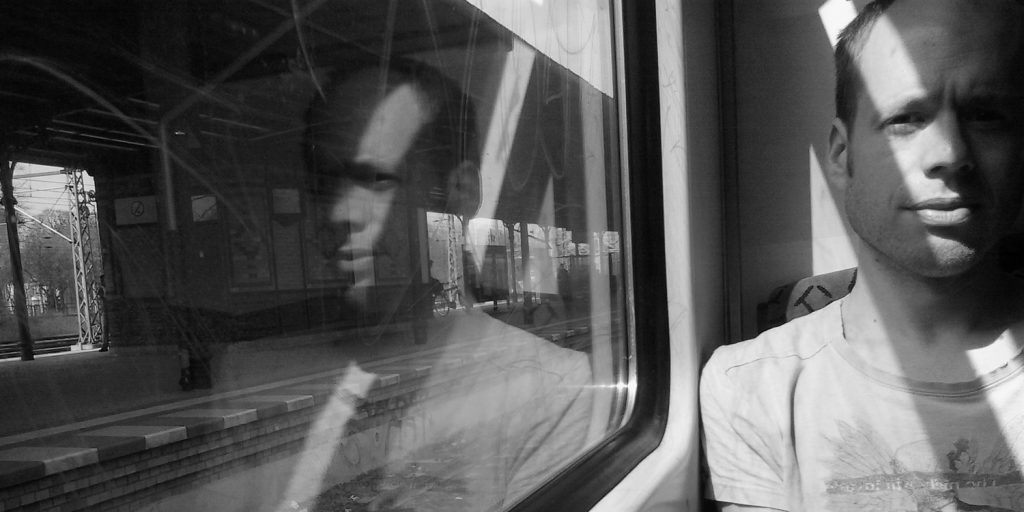 Merrin Karras is from a younger generation of electronic musicians and even though he’s in the contemporary electronic scene making techno and house music under the guise of Chymera, he’s also exploring earlier ambient sounds that go back to 1970s Space music and 1980s New Age. It’s part of the sound that shaped his new album Apex which he released under a new alias, Merrin Karras. From his Berlin apartment Brendan Gregoriy talks about horror films, electronic music and space.

You’ll find the music of Brendan Gregoriy under a few names, I Am An Exit, Chymera and most recently, Merrin Karras. Its electronic music but whatever you do, don’t call it electronic dance music or EDM.

“EDM is so, okay, I guess from the outside looking in it may seem that they’re, very closely related,”, Gregoriy grants, “but I think that most other people in in the underground scene don’t really have much relation to to EDM.”

For Brendan, It’s like the difference between psychedelic rock and top 40, or Picasso and Thomas Kinkade.

“That’s like the pop of, of the electronic world in a sense, I think.”, Gregoriy clarifies, “But but EDM as itself, as as a movement, I mean there haven’t really been any  artists or songs or anything that I’ve heard, which have inspired me in any way.”

Brendan Gregoriy is talking to me on Skype from his modest, Berlin apartment that he shares with his girlfriend. He’s in his living room which doubles as his studio. Brendan got into electronic music through House, Trance and other Techno derivatives, but he also has influences that come from an earlier time, right in Berlin where the Irish musician has lived since 2010.

“Obviously I’d heard Tangerine Dream before”, attests Gregoriy, “and then just kind of looking up about them and then seeing okay, that they’re a part of the or influenced by the Berlin school, the form of music.  And I thought well that’s cool, I’m living in Berlin. So then I started reading about that and then I started looking at like YouTube videos and I stumbled upon Klaus Schulze, some of his performances from the ‘70s. And it was just incredible because he was doing stuff that a lot of people are doing now today as well with with a lot of the same instruments. And it was just so completely ahead of its time.”

Tthen he discovered the musical descendants of the Berlin school like Steve Roach.

“I think it was”Reflections in Suspension” from Structures in Silence,” he enthuses. “And that was literally the kind of music I’ve been waiting for my whole life. And it was amazing that it was made three years after I was born, so it has literally been there all my life, but yeah, it took me this long to to find it. I spent the first week just listening to that on headphones before I went to bed, and kind of just being absolutely mesmerized by it.”

It’s those sounds that led to Brendan’s debut as Merrin Karras and the Album, Apex .

Brendan Gregoriy was born in Munich, but the 35 year old musician’s mother was Irish and he grew up in Ireland from the time he was 3 months old. His mother was a jazz singer. His father was a jazz drummer, and his step-father was a guitarist whose heroes were Dylan and Springsteen. So of course, Brendan went another way.

“When I was like oh 12 or 13, I heard Metallica for the first time,”, recalls Gregoriy. “It just kind of blew my mind and I just wanted to be able to to play everything that they were doing. It just looked so cool to be up there, you know, playing, playing all these riffs on stage.”
And he did that for a while.

“Yeah, well I was a heavy metal guy throughout my teenage years.”, Gregoriy agrees, “And then I went to university at the age of 18 and I got friendly with a guy who lived just around the corner from me, who was also going to the same university. He was a DJ and he showed me his turntables and I’ve never really seen anything like this before.”

The guitar went in its case and the turntables spun him in a new direction. He began recording his own music, first under the name I Am An Exit and then as Chymera. This music was designed for the dance floor but as Merrin Karras, He went in a different direction once again.

“Yeah, Merrin Karras is definitely by far the most serene, peaceful music that I’ve done.”, Gregoriy admits, “But I think ambient also has the potential as well to be quite dark and foreboding at times.”

Maybe that’s why he took the name, Merrin Karras. It might ring a bell for fans of “The Exorcist.”

“The names of the priests are Father Merrin and Father Karras,” Gregoriy explains, “I just kind of thought hey, it would be kind of cool, what if I just took those two second names and made them my name. And I thought it kind of fit in in the sense of the film had kind of a spooky ‘70s synth soundtrack as well.  I thought some of, some of the tracks that I was making as Merrin Karras were a little bit kind of somber, melancholic and maybe it kind of fitted the the mood a bit, you know.” There is a darkness to the music of Merrin Karras. Brendan favors 70s era electronic sounds, fat analog bass bottoms, wispy, mysterious melodic leads and layers of filter-swept atmospheres.

After traveling from Ireland to Costa Rica to Barcelona, His current home has been Berlin. And that also had an influence on Apex .

“I was just staring out my window and in winter here it gets dark at 4:30 in the afternoon,” Gregoriy says “It’s just miserable looking outside. And I think that definitely kind of, made its way into my music.”

Brendan Gregoriy continues to play more House oriented electronic dance music as Chymera and he has Merrin Karras to assuage his ambient side. And when was the last time he played electric guitar?

“Actually at a house party about two weeks ago,” he reveals. “But I broke the G-string on it and that was that. I think I was playing something by Neil Young, maybe Southern Man or something.”

He laughs at that thought, possibly revealing that there’s still an influence from his parents after all. The latest album from Merrin Karras is Apex . It’s released on A Strangely Isolated Place Records.