Peter Gabriel Floats like a Butterfly, Sings for Ali 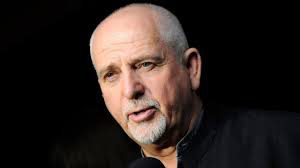 I don’t know what’s more surprising, that Peter Gabriel recorded an homage to Muhammed Ali, or that he finally put out some new music. This is his first tune since 2013, and his first significant new work since Up in 2002. (And that was 10 years after the previous album.)
“I’m Amazing” has all the Gabriel signatures. Tribal grooves with multiple hand percussion instruments., snarling electric guitar, what has to be Tony Levins  gut-grabbing bass lines and  African chants that almost sound like found sound, but probably aren’t.  And then there’s Gabriel’s earnest, impassioned vocals, still as powerful now as when he sang “Biko” some 37 years ago. Unlike “Biko” “I’m Amazing” is more generalized in its lyrics, the references to Ali more poetic than polemic. But you can imagine Ali, rhyming this verse from the song:

It’s a triumphant, multi-part work, moving from introspective yearning to prideful bombast. The closing couplet says it all

Cause I can!
And I will!
It’s moving in me
The spirit is free